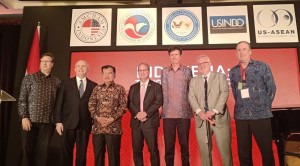 Indonesia seemed to be exhibiting multiple personalities during my visit last week as it simultaneously hosted a major athletic event(Asian Para Olympic Games) and banking event (World bank/IMF Annual Meetings) while organizing rescue and relief victims of a major earthquake and tsunami in Palu, Central Sulawesi. Oh, and it’s also dealing with a depreciating currency. The economic boost of these major events couldn’t have come at a better time, however, one consequence was the dearth of Jakarta Silverbird taxis, repositioned to ferry thousands of new visitors. Political campaigns (national elections are in April 2019) are underway; Indonesian TV sported lively debates among teams representing President Jokowi and his rival Prabowo Subianto. The first “scandal” of the season emerged after an activist/actress Ratna Sarompaet accused unknown assailants of disfiguring her face when in reality she had just had plastic surgery. Prabowo and his camp was forced to apologize for amplifying the lie; they had implied that she was attacked because of her criticism of the government, an obvious swipe at the President. Granted an 8 day visit is hardly enough to get a comprehensive view but here are a few observations nevertheless.

Having lost close to 10% in value over 2018, the rupiah appears battered but Indonesia is resilient. I had one senior banker inform me that first tier banks are in reasonably good shape as they have limited their dollar exposure to exporters with good quality. However, he expects to see non-performing loans rise at the secondary and tertiary levels. Anecdotally, he is seeing more empty shop houses, the small retail establishments that are the life blood of the local economy. My banker contact also argues that Indonesia needs to raise its prime rate a higher amount relative to the Fed; that just matching it places Indonesia further behind since its GDP is proportionally smaller. Equity markets are also being negatively affected by a weaker currency, leading the market down even though new buying opportunities exist. Bank Indonesia and the Finance Ministry are focused more on controlling inflation and curbing imports at the expense of growth. KADIN has objections but the government counters that its too soon to assume the new policies will be counterproductive.

In Bali, AICC helped organize a successful gala dinner on October 10 on the sidelines of the World Bank/IMF meetings. Initially planned to celebrate and strengthen the US-Indonesia commercial relationship as well as Indonesia’s hosting capability for a world class business event, the dinner became a conduit for private sector support for relief efforts in Palu. VP Kalla keynoted the dinner and Finance Minister Sri Mulyani and Coordinating Maritime Minister Luhut Pandjaitan represented the government at a business roundtable beforehand. BKPM Chairman made a heartfelt appeal for private sector support for relief efforts and many US companies have already positioned supplies and equipment to Palu.

Energy and mining activities continue to have split personalities. Higher coal prices are boosting the demand for excavation equipment sales but Pertamina’s winning all the significant PSC renewals away from foreign energy companies and its sinking financial condition is beginning to send negative signals into this sector. One local businessman with deep connections to Pertamina told me morale there has never been lower, an acknowledgment of the unrealistic burdens being placed on the company: maintaining gas subsidies without compensation ($2 billion), a mandate to finance new refineries ($25 billion), higher oil prices but weaker currency, mandated distribution of biodiesel, operating the Mahakam block , future investment in the Rokan block after it takes it over from Chevron. Most knowledgeable people I spoke to believe the new gross split has merit but is not calibrated for today’s international market. There is little “uptake” on new exploration blocs; ironically Myanmar has more activity relative to Indonesia. One person told me: “Pertamina is out of money”. In Yogya I met the rector of a local university known for its oil and gas focus who told me no one on his faculty believe Pertamina can assume field operations of the size of these 2 blocs without suffering significant production declines.

In mining, Freeport continues to export as negotiations continue on implementing the sales and purchase agreement for Rio Tinto’s approximately 40% interest. The main areas that need resolution are: environmental issues (tailings management), operational/management control, fiscal stability terms (tax management). The consensus is generally positive but some I spoke with believe the President should be more directly involved. The inability of Indonesian mining companies to meet the demands of the Ministry to build smelters (mostly due to the expense) has some analysts predicted a relaxation of export bans, given the rupiah situation. A new regulation on divestment acknowledges that “fair market” value includes a calculation based on known proven reserves, a concept that the government had previously resisted and a cause of widespread consternation among foreign operators. However, analysts I met maintain their view that the new permit system will need further alteration to attract significant foreign investment.

Finally, I met the Director of a large state-owned trading company with big plans to buy more US products in fulfillment of a pledge Indonesia’s Trade Minister made when he met US Commerce Secretary Wilbur Ross in July. More to come on this story. Its clear Indonesia wants to do more with the US rather than China but do our business models line up. Always a question.