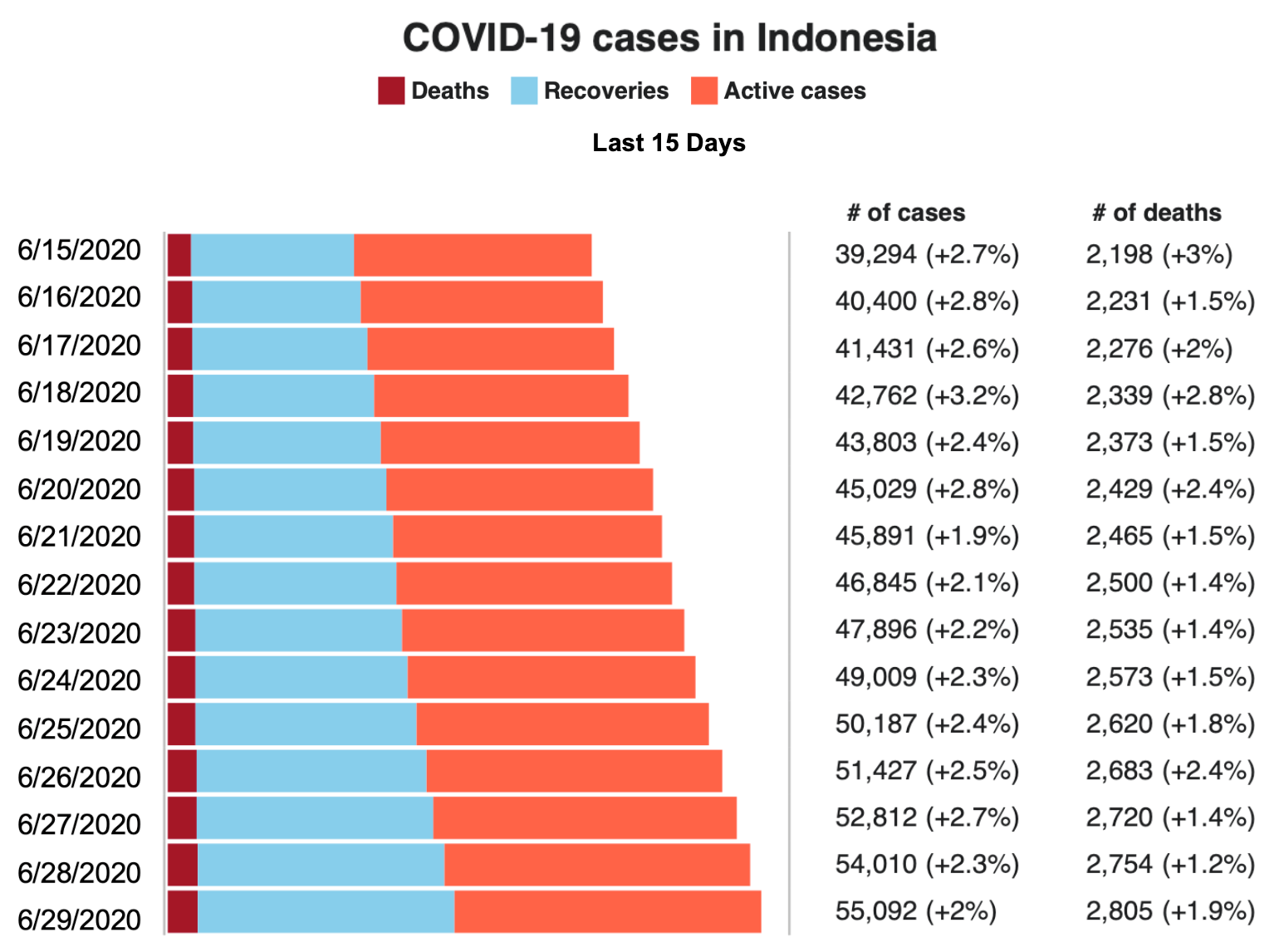 The number of active COVID-19 cases continued to grow over the past week but at the same 15% rate as the previous week.  New cases (1,061 on June 25) varied widely by region and were slightly lowered on a seven-day moving average than a week ago.   This is hopefully more than a “pause” in an upward trend.   Indonesia’s most populous province, West Java, experienced a decline in cases during June, demonstrating that it is possible to control the pandemic.  Other provinces such as Papua, are running out of hospital beds.  Jakarta, now allowing a relaxation of social distancing and stay-at-home orders, has seen an uptick.

President Jokowi uncharacteristically erupted in anger at a recent Cabinet meeting at the complacency he observes.   Quoted by The Jakarta Post and Kompas.com, the animated and agitated President said: “The atmosphere in the last three months and the next three months should be one of crisis. We should not consider [this situation] to be normal. That is very dangerous. And I still see that many of you see this as normal.”  Pointing to the allocated emergency budget for health services as an example, the President pointedly asked why only 1.5% of an allocated US$5.28 billion had been disbursed. “All the money that’s supposed to be for the people is stuck there,” President Widodo complained. Underlining that he is prepared to send cabinet ministers packing who fail to rise to the level of crisis managers, Joko Widodo said: “I will take any steps necessary, including extraordinary ones, for our 267 million people. [I might] disband agencies. [I might] reshuffle [the Cabinet]. I have considered many options.”

In an online briefing by the Investment Coordinating Board (BKPM), the Director for Promotion, Dr. Iwan Darmawan, said his agency has had success interceding with Immigration to gain entry for foreign businessmen visiting in Indonesia in support of their foreign direct investment.  This exception to Indonesia’s broad travel ban can be initiated by a written statement to the Chairman of BKPM.  The BKPM representative office in NY can be the point of contact for US investors. Contact them via (646) 885-6600 or muchamad.iqbal@bkpm.go.id.