Cumulative number of reported cases: As of 5/16

At least 42.4 million Indonesian citizens have received the third or booster dose of the COVID-19 vaccine as of Saturday, according to a report from the COVID-19 Handling Task Force. The number of third dose recipients grew by 213,553 on Saturday, taking the total tally to 42,415,365.  Nationwide cases are again dropping after rising earlier in the month. 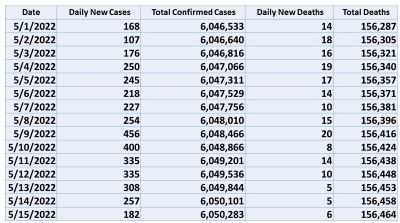 As of April 29, it is now possible to travel to Indonesia like it was pre-pandemic: visas are obtained upon arrival at all international gateways, not just Bali. Citizens of 9 countries of ASEAN and 60 worldwide (including the US) are allowed basic entry for tourism and general business purposes.  The following requirements are now listed, according to a circular from Indonesia’s Foreign Affairs ministry announcing the policy change:

Approval Rating Down: Surging commodity prices have taken a toll on President Joko “Jokowi” Widodo’s popularity, according to the latest poll.   A public opinion survey conducted by pollsters Indikator Politik Indonesia, which surveyed 1,228 people across the country in early May, found that Jokowi’s approval rating stood at 58.1 percent, the lowest point since December 2015, when his rating plunged to 53 percent. In January, his rating was still at 75.3 percent.    Indikator Politik executive director Burhanuddin Muhtadi said on Sunday that inflation, which hit a record 32-month high in April, was the most-cited reason for public disapproval of his performance.

Jokowi in DC and Texas: President Jokowi joined the US-ASEAN Summit (May 13-14) hosted by President Biden and took time to promote investment in green technology, value-added metals processing, and digitization.  He also met Congressional leaders, making positive statements about the need for a secure, and open Indo-Pacific region, anchored by US involvement. Jokowi also promoted this year’s G20/B20, scheduled for November, emphasizing its importance to economic recovery. According to reports, Jokowi cancelled a gala corporate/diplomatic dinner outside the framework of the summit but did at least meet CEO’s from two US companies (Air Products and Chemicals, Tesla).  He also participated in a summit roundtable discussion with US business leaders.

In DC, President Jokowi met with Air Products & Chemicals CEO Seifi Ghasemi to follow up to the signing of an investment MoU in coal gasification and its derivatives in Indonesia that could be worth as much as $15 billion over time. Jokowi traveled to Musk’s Space X facility in Texas to personally invite Tesla’s Chairman to join the B20 later in the year and to invest in the electrical vehicle battery industry.

Here are some of the President’s public remarks:

On the war in Ukraine: While making no statements on Russia Jokowi said it had “created an enormous human tragedy and impacted the global economy”. He warned that a similar conflict could erupt in other regions, including the Indo-Pacific, if international law was disrespected, multilateralism neglected, and unilateralism prioritized.

On US Investment: “Hopefully, American businesses can contribute in developing [Indonesia’s] digital infrastructure, facilitating digital capacity building, and helping us enter the global value chain with digitalization . . . We invite American businesses to invest in Indonesia,” he said. “With a population of 270 million people, the majority of whom are of productive age, Indonesia continues to make breakthroughs and innovations to be able to advance. With a vast area and abundant natural resources, Indonesia is very rich in industrial raw materials and green energy.”