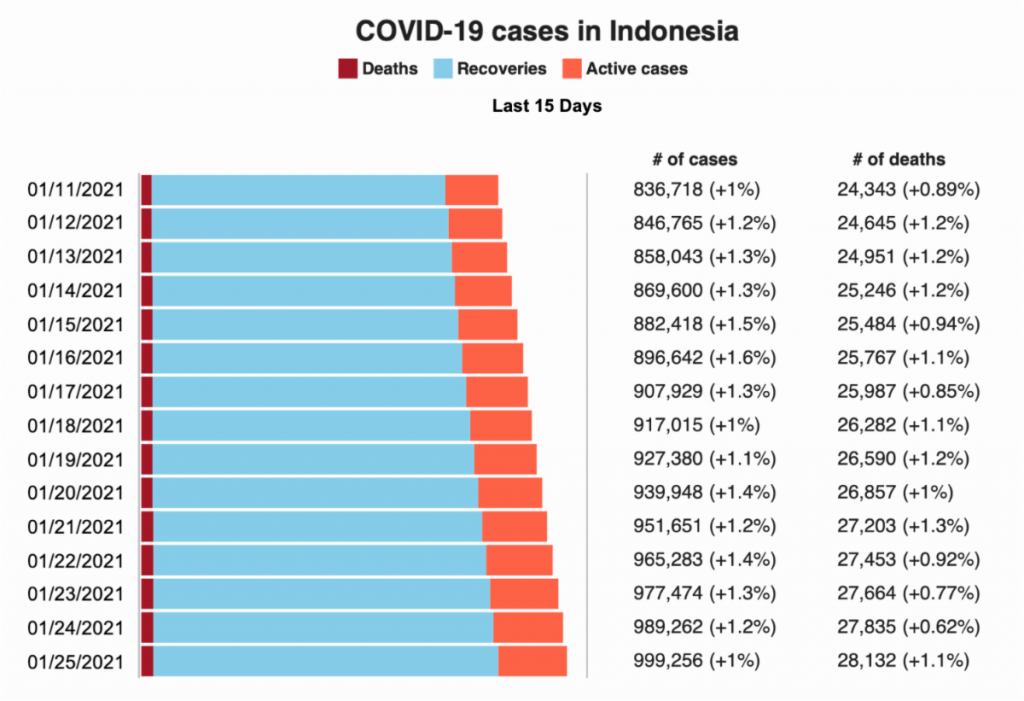 Case detections and positivity rates dropped significantly, indicating that Indonesia, like other nations, may be past the post-New Year holiday “spike”. New confirmed cases fell 19% on a seven-day moving average. This is the first change in the upward trends since October 2020.

Indonesia has moved to a policy of micro-level restriction while partially lifting restrictions on economic activities. The government may lockdown at a neighborhood of “micro” level. The business sector is now open at 50% capacity from initially 25%. Workplaces can now adopt a 50% work-from-home policy rather than 75%. Additionally, shopping centers or malls and restaurants can operate until 9 pm (2 more hours).

According to the COVID-19 Handling Task Force, Indonesia has administered the first doses of coronavirus vaccine to 1,068,747 healthcare workers across the country as of Sunday (02/14) Of the total, 425,578 healthcare workers have got their second vaccine shots, an increase of 10,092 compared to a day earlier. Overall, the vaccination campaign will target 181,554,464 people, or 70% of the total Indonesian population, with the aim of building herd immunity against the coronavirus.

On Feb. 8 Indonesia extended the closure of its borders to foreigners for another two weeks until Feb. 22, a day after its drug monitoring agency approved the emergency use of China’s CoronaVac vaccine for the elderly. Exceptions, however, will be granted for long-term residents, those from countries who have travel corridor arrangements with Indonesia, and those who get special permission from Indonesian ministries or institutions. Health protocols, including a five-day quarantine, still apply.

Indonesia will defer regional elections until 2024 in order to coincide with national and Presidential elections.  Caretakers will be appointed for elected officials whose terms end in 2022 and 2023. President Jokowi appears to have the support all but a handful of Parliamentary factions.

Rosan Roeslani, currently Chairman of KADIN (Indonesian Chamber of Commerce and Industry) was nominated by President Jokowi to be the next Ambassador to the United States.  Rosan is a businessman with a background in private equity and coal. He has been a business partner with current State Enterprise Minister, Erick Thohir, and Tourism Minister, Sandiago Uno