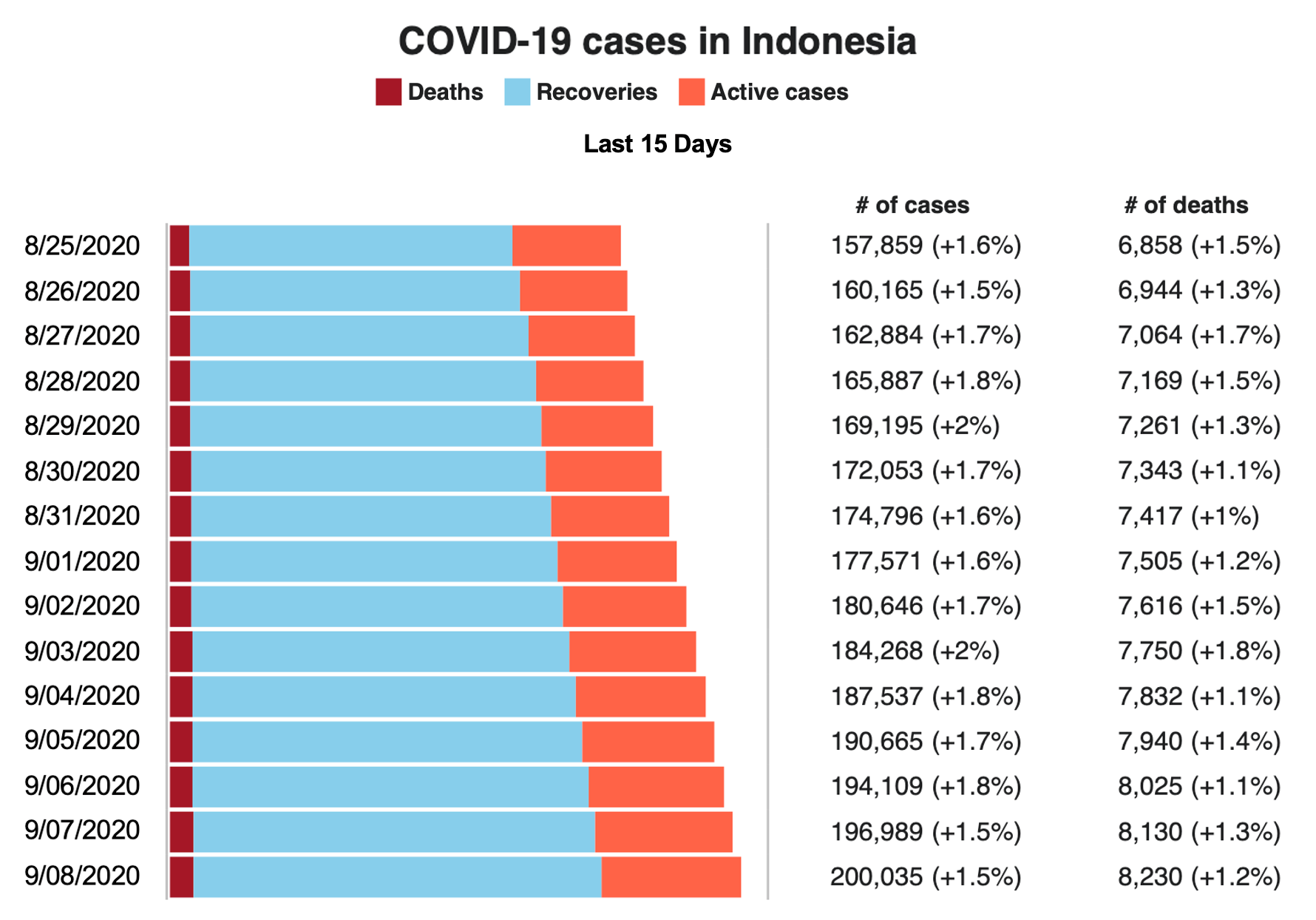 As Indonesia crossed the 200,000 case mark, Reuters reported that a milder but more infectious mutation of COVID-19 has been found in Indonesia and researchers are trying to determine if that is behind the recent rise in case numbers. The strain, which the World Health Organization said was identified in February and has been circulating in Europe and the Americas, has also been found in neighboring Singapore and Malaysia.

In the week ending September 4 total case growth in Jakarta surged to 17%; active cases also grew as did fatalities.   Governor Anies Baswedan and President Jokowi are considering returning to a stricter policy for Jakarta to control the outbreak. They haven’t specified it yet but it could include some type of temporary lockdown.

Syahrizal Syarif, an epidemiologist with the University of Indonesia, warned Indonesians must remain vigilant, as his modelling suggests the country may see its caseload rise to 500,000 by the end of the year. “The situation is serious …. Local transmission currently is out of control,” Syarif said, adding that the number of infections found daily could have been much higher if laboratories were able to process more specimens in a day.

Malaysia announced a temporary ban on all travelers from Indonesia, Philippines, India, the United States, the United Kingdom, Brazil, Russia, Spain, Bangladesh, France, Saudi Arabia and Italy, all of which are among the top 25 countries with the most confirmed COVID-19 cases. At least 59 countries have restricted entry of Indonesian citizens over concerns of the high number of Covid-19 positive cases in the country. Meanwhile, national flag carrier Garuda Indonesia has resumed flight services to 2 cities in China following months of travel restrictions due to the coronavirus pandemic. Currently only essential business and diplomatic travel is allowed.

Indonesia’s legislative rules require that the government explicitly approve legislation before it can be deliberated and that hasn’t yet happened.   The perception of increased financial risks may have led to a slippage in Indonesia’s currency, stirring responses from ratings agencies, government securities firms and regional economists. Some pointed out that giving BI a mandate to include jobs and growth was similar to that of the US Federal Reserve, others suggested the plan gave too much monetary authority back to the Finance Ministry where it had been prior to 1998 and could lead to future imprudent decisions.

In response to the concerns Finance Minister Sri Mulyani reiterated on September 4 that BI’s independence will be maintained, echoing similar comments made by President Joko Widodo.  However, irrespective of these comments it appears that some key changes will be put forward to achieve better government control over the banking system.