President Jokowi’s visit to the US October 26 and 27, although shortened by the forest fire issue, included a longer than expected bilateral with President Obama, progress on security relations, a substantive unexpected announcement by President Jokowi on TPP (“Indonesia intends to join”), successful sessions with potential and current investors, and roll backs of unnecessary rules for foreign workers as well as possible changes to the negative investment list.  Although the ongoing issues of criminalization and incarceration of employees for civil infractions as well as nettlesome energy and mining contract extensions may have been discussed, no follow on announcements were made.  The comments of ministers who joined the visit were full of reform rhetoric and combined with the TPP statement one might conclude that Indonesia is moving towards a RBE (rules-based economy).  The President did discuss foreign affairs and the economy at Brookings but turned to his ministers repeatedly to answer nettlesome questions.   This young President has the strengt 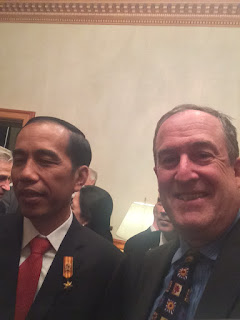 h to delegate but he could send no stronger signal than resolving the case of the Chevron employees that remain incarcerated after courts have decided in their favor as well as making the necessary regulatory changes so international energy and mining companies can safely extend their contracts in a timely fashion facilitating $20-30 billion of potential investments.  Such moves would resonate well beyond the extractive sector.  But kudos must be given to the overall strong signals the visit generated.  I had met Jokowi when he was mayor of Surakarta but he did remember me and our visit to his furniture factory.