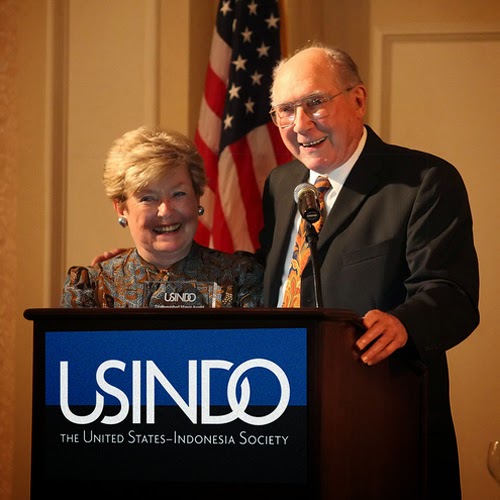 The passing of Ambassador Edward Masters in March sent a twinge of sadness through many of us.  He taught us many things by his actions as much as his words. Together with his wife Allene, he created ideas, institutions and relationships that lasted.  Beginning in the mid 1960’s he experienced Indonesia from multiple perspectives: junior diplomat, ambassador, business executive, and for the final chapter of his life, NGO leader.  He worked at all of these occupations with the knowledge that to be successful all required judgment, sensitivity, and an unusual ability to work with others. Ed had these in spades. Although I never worked for him directly we did speak often and I consider him to be one my mentors. When I least expect it, something he told me years ago will pop into my head and I say to myself, “This is how Ed would handle it”.
While in his presence you could learn something important about the correct American approach to Indonesia and not experience that you were being taught.   It was Ed’s wonderful gift that he could put people at ease while he was being instructive.  I wonder if that is how it was with President Suharto when as Jimmy Carter’s Ambassador to Indonesia (1977-1981) he made it clear (probably in a subtle way) that the US was not tolerant of the many political prisoners (including the great novelist Pramodoeya Ananta Toer) still being held under terrible conditions since the mid-60’s on Buru Island.   With little fanfare many were released (including Toer) and the US, and certainly not Ed, did not grandstand.  In the mid 1990’s I became aware that Indonesia might be appointing a new ambassador to the US who was named as an unindicted co-conspirator in a scheme to sell false Indonesian government promissory notes.  Ed knew exactly how to handle it.
His path-breaking quiet diplomacy and close reading of Indonesian customs heavily influenced AICC’s approach to resolving commercial disputes: behind the scenes, informal discussions were preferable to press conferences and public outcries. Its how we pushed back an attempt by an Indonesian exporter in the late 1980’s to be the sole exporter of cinnamon or other commercial hiccups better left out of the public eye.   Success came because at the heart we were lifelong friends as much as we were trading partners.
In a 1982 speech to an AICC conference in NY, Masters spent a good part of it quietly admonishing American businessmen to be less impatient and more observant of local customs in Indonesia: “The style adopted by a foreign businessman is frequently as important as his proposal. Choosing a business partner in Indonesia is somewhat like welcoming a son-in-law into the family. Its to be approached with perception, caution, and sensitivity.”  And perhaps more important he said, “ All too often the American businessman gives the impression that he is in a great hurry, inadvertently signaling that he has more important things to do and that the relatively easy Indonesian pace is a waste of time. ”
Edward Masters’ way of working lives on in the institution he and his wife Allene built that recently turned 20, The US-Indonesia Society, and continues to inform how we at AICC approach contemporary issues.  Like the John Deere tractor he bought for himself at age 80 to clear land on his East Chesapeake Bay property, this son of the American heartland was built to last.
By wayne-forrest2|2018-02-22T20:41:40+00:00May 13th, 2014|American Indonesian Chamber of Commerce, Edward Masters, Indonesia, US Embassy Jakarta, Wayne Forrest|0 Comments