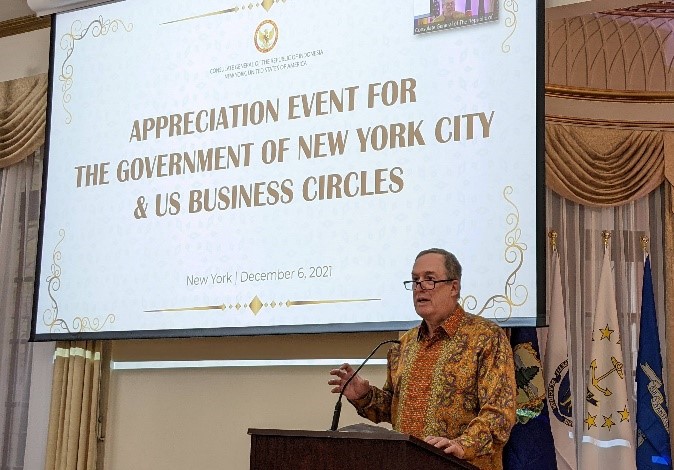 More than $7.2 million worth of personal protective equipment (PPE) is on its way to Indonesia thanks to the generosity of the City of New York and the support of Freeport- McMoRan Inc., in partnership with the US-ASEAN Business Council Institute (USABCI); the American Indonesian Chamber of Commerce (AICC); Yayasan BUMN untuk Indonesia, the foundation associated with the Indonesia Ministry of State-owned Enterprises; and the Global Task Force on Pandemic Response (GTF).

The 262 tons of PPE to address COVID-19-related needs, including COVID-19 test kits, N95 masks, and a variety of disposable gowns, were initially acquired in 2020 by the City of New York and donated after the City did not need to use them. Freeport-McMoRan has paid the shipping costs, and FedEx has organized the shipments to arrive at the Port of Jakarta in four ocean shipments between mid-December and early January.

“Once again, the U.S. business community has shown its heart, and it is an honor to collaborate with Freeport-McMoRan and FedEx to spread not just vital material but good will to the people of Indonesia,” said AICC President Wayne Forrest.

The donation of the 46 40-foot containers follows two air shipments of New York City-donated PPE in mid-September worth nearly $275,000 and supported by in-kind contributions from express freight carriers FedEx and UPS.

“Though spread rates have flattened throughout the archipelago, we know that more will need to be done 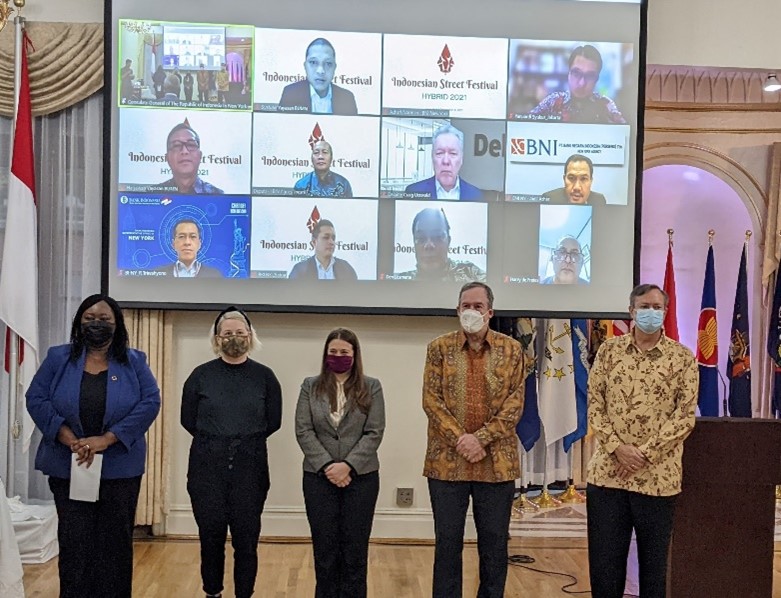 to attend to those who may contract the virus in Indonesia in the coming months,” said USABCI President Elizabeth Dugan. “USABCI is proud to be part of the village that has come together to make this happen.”

Indonesia battled a spike in COVID-19 cases during the summer due to the highly transmissible delta variant. While the peak in cases has ebbed, there is still an urgent need for relief materials, especially with the emergence of the omicron variant. Having enough PPE on hand will give Indonesia greater resilience in responding to potential spikes in the future as new variants of the virus emerge.

“We are very grateful to all of the organizations for their enormous generosity to ensure the protection of communities throughout Indonesia in overcoming the current COVID-19 pandemic in Indonesia” said Harjawan Balaningrath, Chairman, Yayasan BUMN untuk Indonesia.  “As we receive this vital equipment, we will work closely with the Indonesia military and police to conscientiously warehouse the pallets and see that they are distributed to provinces in greatest need, especially those in the east.”

Ceremonies to celebrate the effort were held in New York, NY on December 6, in conjunction with the Indonesian Street Festival, and will be held in Jakarta in mid-December when the first vessel with six containers pulls into port.

The American Indonesian Chamber of Commerce (AICC) was established in 1949 before Indonesia received its full sovereignty from the Netherlands. A private membership organization headquartered in New York, AICC was the first US organization to openly lobby for Indonesia’s independence. Its members include major investors who have contributed greatly to Indonesia’s economic development as well as small companies who are the lifeline in the US for Indonesia’s exports.  AICC members are primarily US companies but also include companies based in Indonesia as well as other countries.

The US-ASEAN Business Council Institute, Inc., is the charitable arm of the US-ASEAN Business Council, drawing on the spirit and power of the Council’s membership to create opportunities for deeper engagement by U.S. companies in ASEAN.  The Institute focuses its energies on activities that help educate and build the capacity and knowledge base of partners and stakeholders throughout Southeast Asia and serves as an important collective voice, amplifying the impact of U.S. companies’ contributions and dedication. The Institute also telegraphs the basic values that U.S. companies share and is prepared to support:

Other initiatives in the fields of education, governance and rule of law, health, the environment, trade, commerce and investment

Freeport-McMoRan is a leading international mining company with headquarters in Phoenix, Arizona. The company operates large, long-lived, geographically diverse assets with significant proven and probable reserves of copper, gold and molybdenum. Freeport-McMoRan is one of the world’s largest publicly traded copper producers. The company’s portfolio of assets includes the Grasberg minerals district in Indonesia, one of the world’s largest copper and gold deposits; and significant mining operations in North America and South America, including the large-scale Morenci minerals district in Arizona and the Cerro Verde operation in Peru. By supplying responsibly produced copper, Freeport-McMoRan is proud to be a positive contributor to the world well beyond its operational boundaries. Additional information about Freeport-McMoRan is available at fcx.com.

FedEx Corp. (NYSE: FDX) provides customers and businesses worldwide with a broad portfolio of transportation, e-commerce, and business services. With annual revenue of $84 billion, the company offers integrated business solutions through operating companies competing collectively, operating collaboratively, and innovating digitally under the respected FedEx brand. Consistently ranked among the world’s most admired and trusted employers, FedEx inspires its 570,000 team members to remain focused on safety, the highest ethical and professional standards, and the needs of their customers and communities. FedEx is committed to connecting people and possibilities around the world responsibly and resourcefully, with a goal to achieve carbon-neutral operations by 2040. To learn more, please visit https://www.fedex.com/en-us/about.html.