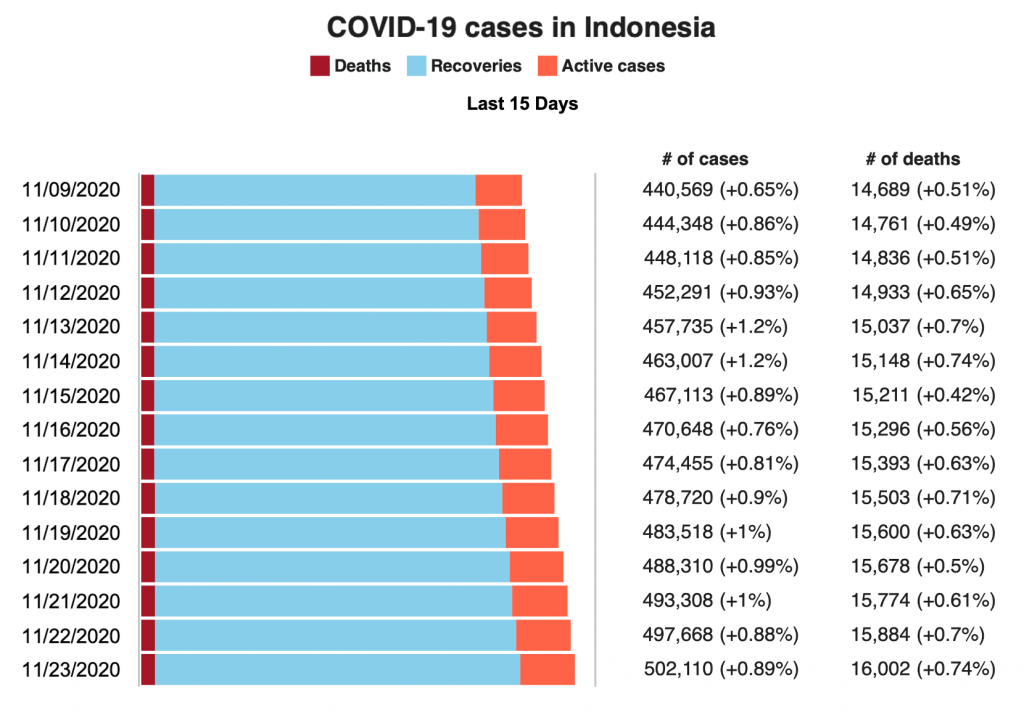 Benchmark: Since the start of the pandemic Indonesia has officially recorded over half million cases (502,111) with 84% recoveries (422,386)

Daily PCR testing levels rose above 40,000 for only the second time since the beginning of the pandemic. The positivity rate of 11% matched the previous week. Cumulative cases detected nationally rose 6% week-on-week. This rate is higher than the two previous weeks. Active cases rose 6% week-on-week; the first rise since early October. These same trends describe Jakarta; new cases breached 1,000 on November 18, the first time in a month. In West Java, cases plateaued; Central Java spiked upward; and the 4 largest provinces outside Java also plateaued. The rise in testing levels is a positive development but officials acknowledged that labs have installed capacity to do 80,000 tests a day. Too many members of the public may be sheltering at homes with symptoms and don’t want to be tested.

The Jakarta administration announced on Sunday (11/22) that it would extend the transitional period of the large-scale social restrictions (PSBB) for another two weeks until Dec. 6 amid a recent surge of new COVID-19 cases and following a number mass gatherings that led to accusations of widespread violations of health protocols.

Indonesia aimed to vaccinate 107 million people by the end of next year. It has secured commitments to source vaccines from China’s Sinovac Biotech, China National Pharmaceutical Group (Sinopharm), and CanSino Biotech. However, they have yet to announce the result of their stage III clinical trials.

Despite discussions of partnerships, Indonesia is unlikely to procure Covid-19 vaccines produced by Pfizer, as its vaccine requires a refrigeration temperature far beyond the archipelago’s logistical capability, according to a top executive at a state-owned pharmaceutical company.

Coordinating Minister for Maritime Affairs and Investment Luhut Binsar Pandjaitan met with US President Donald Trump on Tuesday (11/17). Pictured below, Luhut was accompanied by recently installed Indonesian Ambassador to the United States Muhammad Lutfi, while White House advisers Jared Kushner and Ivanka Trump were seen alongside Donald Trump and International Development Finance Corporation (IDFC) CEO Adam Boehler. (The meeting was not in the President’s schedule and there was no customary White House read-out. The Indonesian government and media reported the event.)

In separate events, Luhut met with US Vice President Mike Pence, who, according to the Indonesian government, offered “joint cooperation in vaccine production between American and Indonesian companies,” and with US national security adviser Robert O’ Brien to discuss a “strategic partnership” in defense and technology.

Indonesia and the United States signed on Wednesday (11/18) a US$750 million agreement to finance trade and infrastructure projects as the countries seek to strengthen economic relations. The memorandum of understanding (MoU) for the deal was signed in Washington DC by Indonesian Ambassador to the US Muhammad Lutfi and Export-Import Bank of the United States (EXIM) President Kimberly Reed. The signing was witnessed by Indonesia’s Coordinating Maritime Affairs and Investment Minister Luhut Pandjaitan, who is visiting the US this week, along with Deputy Foreign Minister Mahendra Siregar, among others.