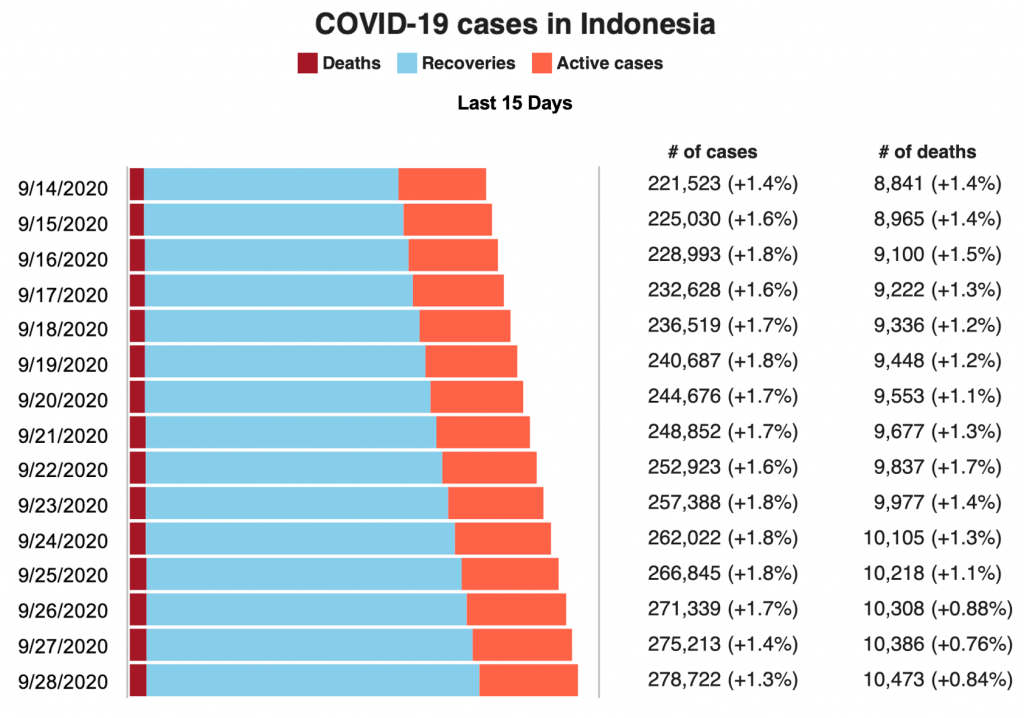 Nationwide active-case growth slowed somewhat, week-on-week but daily detections nonetheless breached 4,000 during the week. Active cases are new cases net of recoveries and fatalities.  In Jakarta, active case growth fell to two percent week-on-week and daily detections leveled off, but they are on a high plane and the governor extended Social Restrictions (PSBB) through 10 October. Nationwide growth is emanating from cases in West Java and provinces outside of Java . After having jumped last week, testing remained flat this week and the positivity rate declined to 14 percent. A study of infection sources in West Java identified travel as a main driver, followed by families, hospitals, offices and places of worship. (source: Reformasi Weekly)

A prominent member of the Government’s Corona Virus Task Force and head of its health division, Dr. Akmal Taher, has resigned and will concentrate his efforts on contact tracing and testing. His recent comments indicate he may have been dissatisfied with the government’s response to date, especially low testing and tracing levels.

Indonesia’s Food and Drug Monitoring Agency (BPOM) is set to visit the facility of China’s pharmaceutical company Sinovac in Beijing to assure the quality of a COVID-19 candidate vaccine currently being developed by the latter, Foreign Affairs Minister Retno LP Marsudi revealed in a teleconference Monday (9/28) Indonesian healthcare experts appearing on an online forum, including Dr. Taher cautioned against expecting early vaccine availability, “The danger is that there are people who are misreading it,” he said, suggesting that it could result in complacency over adhering to health protocols.

The Coordinating Minister for Economic Affairs, Airlangga Hartono, estimates that Indonesia may have lost nearly 90% of much-needed foreign exchange in tourism spending because of the continuing pandemic.