I recently spent 5 days in NY and Connecticut with the man who would be President of Indonesia. Its not hard to see why 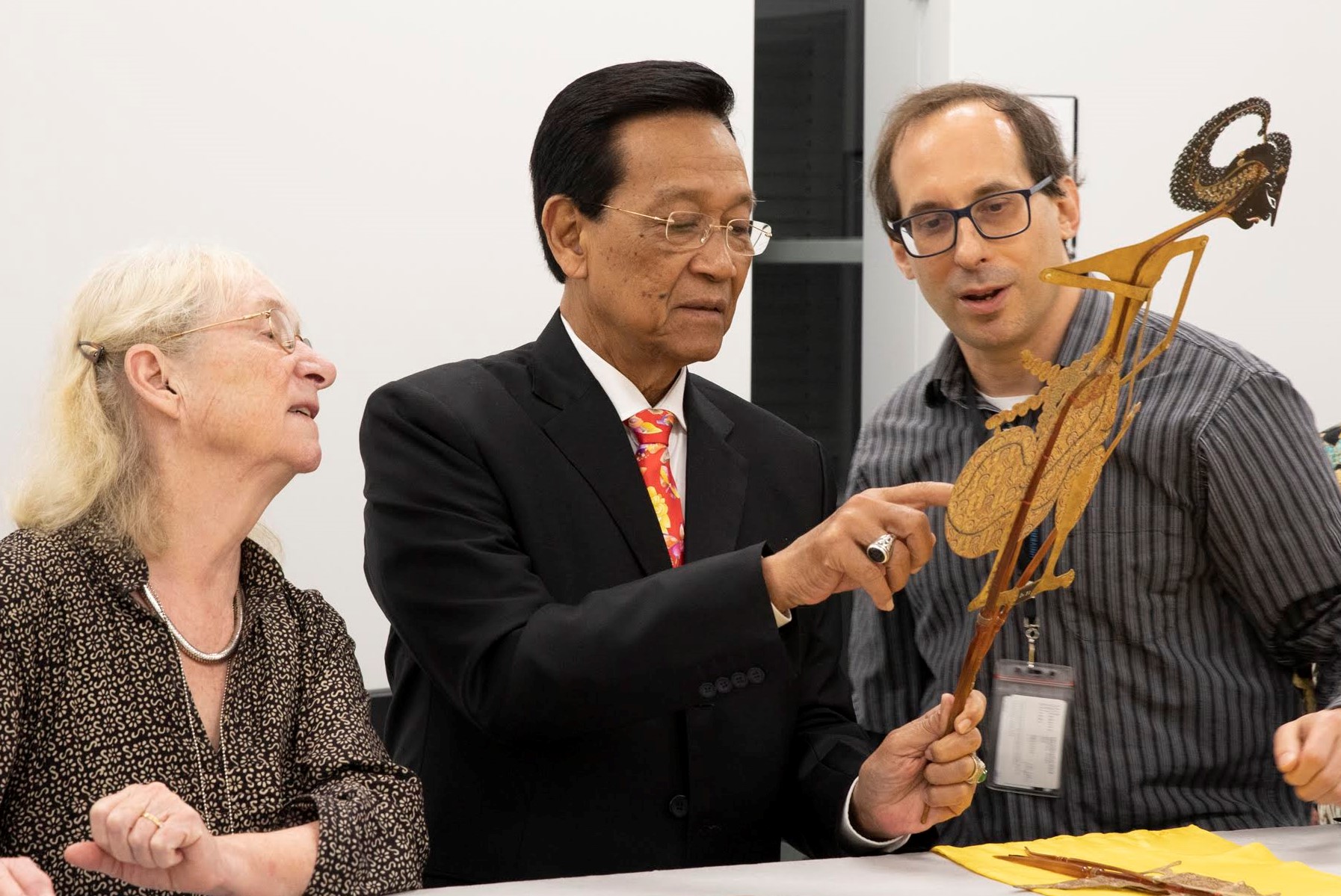 Sultan of Yogyakarta examines a puppet at Yale

so many Indonesians have backed him in past elections, especially in 1999 after President Suharto’s epic resignation. Although he is the Sultan as well as Governor of the Special Region of Yogyakarta, Hamengkubuwono X (HB X) projects humility, democratic values, maturity, gender equality, stability, and fairness. Like his father before him (whose palace harbored revolutionary leaders and whose wealth underwrote Indonesia’s first currency) he has steadied the nation at key moments. Reluctant to talk about current politics, HB X focused on values, culture and sustainable development. Initially he was supposed to travel to the US to discuss educational exchanges with the Presidents of Yale University and Wesleyan University under the auspices of the American Indonesian Cultural and Educational Foundation (AICEF), a small NY-based foundation begun in the 1970’s by Pertamina and major US oil companies to assist Indonesians earn PhDs from US colleges. The Sultan’s visit grew into a major cultural mission with the addition of a group of 30 palace musicians and dancers.

The November 6-11 visit was a 5 day tour de force that included 3 sold out performances at Yale, Wesleyan and Asia Society in NY; public and private business meetings in NY and New Haven with potential investors (hosted by AICC); academic seminars on the role of Islam in Javanese performing arts; student workshops and visits to classes; tour of archiving and digitization facilities; and many discussions on the future of Indonesia, Islam’s role, empowering a digital economy, and how to be a leader.

The Sultan himself, although educated at one of the nation’s finest universities, Gadjah Mada, also embodies a traditional cosmology based on the harmony of dualities and opposites (God-human, good-evil, north-south, rich-poor, man-nature, perfect-imperfect). You detect this the more you are with him. For example, as we left a building on Yale’s West campus that houses its art restoration and digitization complex, he noticed some shiny decorative pumpkins. However, he wanted to know the name of the animal that had taken a large bite out of one of them. “Probably a squirrel”, I told him, to which he replied “every happy feeling can contain sadness”. When we were sitting together watching a demonstration wayang (performance) at Yale’s Art Gallery, he leaned over to tell me that an inconclusive battle between two characters was really an analog of a fierce unresolved debate within ourselves.

How Yogyakarta built the philosophical structures for social and spiritual harmony I cannot answer, but that success has rewarded not just the region but Indonesia as a whole. Students from all over Indonesia are welcomed in Yogyakarta’s 100+ colleges. The Sultan is sure tolerance comes from this diversity and the values held by his people. In return, he looks to promote businesses that “look after the poor as well as the wealthy, men and women”. HB X told me that he grew up in independent Indonesia and thus did not experience the colonialism upon which the Sultanate (created in 1755 under Dutch authority) was co-dependent. On most days he is Governor but can easily slip on the role of Sultan to provide heritage nourishment to his constituents. Realizing the Sultanate is a two way street HB X has democratized palace tradition; for example, a nearby village is allowed to perform certain palace ceremonies and many outsiders can join temporarily as palace retainers to help with performances and other administrative duties. Its no wonder that this region is not only the geographic center of Indonesia but also its spiritual/philosophic core.