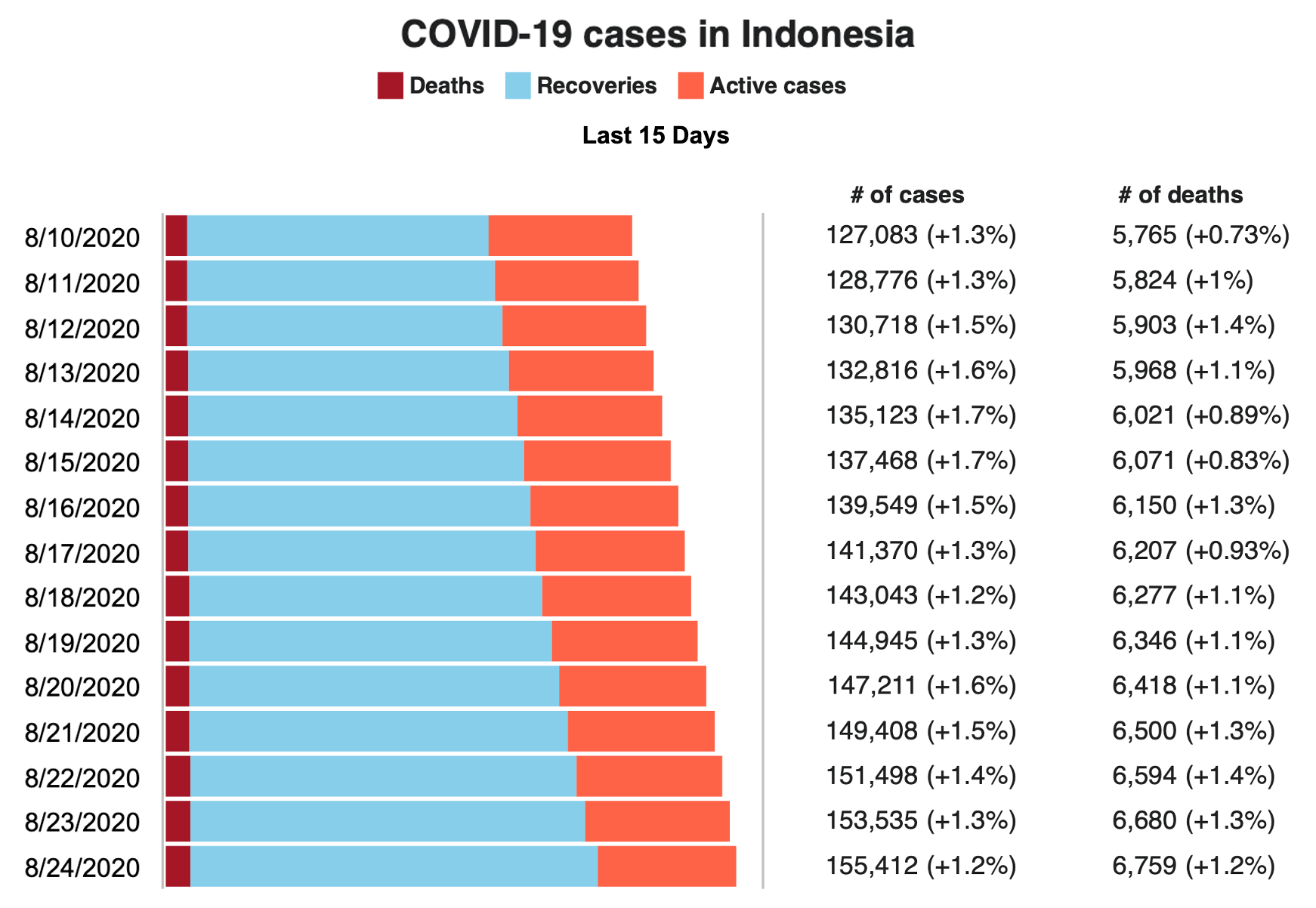 The pandemic continues to spread to all 34 of Indonesia’s provinces with new cases (week-on-week) growing 9% nationally, a slight decline from last week. Active cases grew 2%. National PCR testing has a 15% positive rate with Jakarta accounting for close to 50% of all PCR tests.  Hospitals appear to have sufficient capacity for COVID-cases, but this varies by province; nationwide the rate is 40% but in Papua it is 90%.

Indonesia may not have been as hard hit (lower death rates) as other countries but a key question is the accuracy of official statistics. And unlike other countries, the rate of infection is growing not abating. Some analysts are describing Indonesia not in terms of first and second waves but as one long one.  A recent Reuters article had several ominous quotes: “This virus has already spread all over Indonesia. What we are doing is basically herd immunity,” said Prijo Sidipratomo, dean of the Faculty of Medicine at the National Veterans Development University in Jakarta. “Our concern is that we have not reached the peak yet, that the peak may come around October and may not finish this year,” said Iwan Ariawan, an epidemiologist from the University of Indonesia. “Right now we can’t say it is under control.”

“The government is still prohibiting its citizens from traveling abroad at least until the end of 2020. In line with the policy, we also cannot open the gate to international travelers until the end of 2020 as the situation in Indonesia, including Bali, is not yet safe to welcome them,” said Bali Governor Wayan Koster in a statement Saturday.  Koster noted that Australia, a major source of tourists, is currently banning its citizens from travelling overseas.

President Jokowi used his annual Independence Day (August 17) national address as well as a speech on national finances to push his nation to use the pandemic crisis as an opportunity for “fundamental, structural reform”, and “expand quality employment opportunities”. His speech promoted his signature priorities: digital economy and inclusiveness, domestically-produced products, Pancasila (5 principles), equitable prosperity, regulatory and bureaucratic reform, environmentally-protective policies. The President said: “Our target is not just to free ourselves from the pandemic and exit the crisis. Our steps are to make a major leap forward…” (translation by Reformasi Weekly).