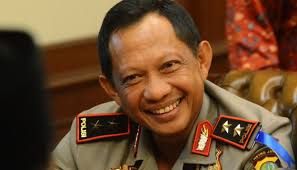 The prospect for deep reforms in Indonesia has always depended on how independent the outsider President Jokowi could be from the country’s sclerotic political party system. His supporters –who detect a masterly Javanese subtlety– have been waiting for a consolidation of his power after which they expect him to deliver on his campaign promises to eliminate graft and patronage. They may have been rewarded this week with the nomination of General Tito Karnavian as National Police Chief. Known for his accomplishments as head of Indonesia’s counter-terrorism agency, Karniawan has been an outspoken proponent of internal reforms and accountability.

“The President’s considerations in choosing Tito Karnavian is to increase the police force’s professionalism to safeguard the public, improve law enforcement, especially regarding extraordinary crimes such as terrorism, drugs and corruption as well as to increase synergy with other law enforcement agencies.” (Jokowi’s spokeperson)

Capturing the assignment was not easy as it has been well known that the former President Megawati, chairwoman of PDIP (the political party that first supported Jokowi back when he first ran for local office as a mayor) supported her former adjutant, Budi Gunawan, the current Vice Chief of Police. Furthermore, Kurniawan was not even on the list of candidates submitted by the National Police Commission headed by Coordinating Minister (Politics, Security, Law) Luhut Pandjaitan, a close confidant of the President. Given the many cases against US businesses where the police have either looked the other way, or been accused of shakedowns, the appointment bodes well for a strengthened rule of law.

Karniawan may remind one of US General David Petraeus, also a battlefield veteran with a PhD. After graduating at the top of his academy class in 1987, Karnavian earned masters degrees in UK and a PhD from Singapore’s Rajaratnam School. Only 51, he made a name for himself early in his career when he apprehended a fugitive Tommy Suharto (son of the former President) accused of murder in 2001. In 2004 he joined (and eventually commanded) the newly created “Densus 88”, a special counter terrorism force that arrested or eliminated hundreds of terrorists such as Noordin Top (thought to be the bomb maker for 2009 Ritz Carlton and JW Marriott attacks). More recently he exposed high-level corruption at the Trade Ministry involving the clearing of goods.

In October 2015, Karnavian gave a major address at an officers school and was paraphrased as saying that police are guilty of “hedonism, consumerism, the enjoyment of glamour and the showing-off of houses and vehicles.” He denounced the prevalence of “unauthorized levies and brokers” in police procedures, and he said there is a need to “impose accountability – because at present the police do not have it.” He said that the main targets for “cleansing and disciplinary operations” should be regional commanders, Criminal Research personnel, traffic police, human resource administrators and logistics managers.”

If, as analysts speculate, Karnavian can bring a new approach to his position, there should be a drop in practices such as one that often affects foreign companies where the police create spurious criminal charges (as was case in the Chevron bioremediation case) either directly or at the request of a third party and offer to drop them for money. Having passed over more senior officers, he may run into opposition. But, he wants to make major changes to recruitment and training, and because of his age, he may have the time needed to do it.

Perhaps because of his strong anti-terrorism credentials there has been little opposition in Parliament. Civil society groups such as the Legal Aid Institute have been more vocal in pointing out alleged abuses in Papua and Jakarta when he was a local commander. Regardless, he should get approved.

The significance of the appointment lies in the President’s defiance of his own party (PDI-P) and perhaps his close aide and backer Luhut Pandjaitan, who once told me “the President has his own mind sometimes”. Together with Golkar’s return to the ruling coalition (reported last month) it signals that Jokowi will be governing more from the instinct for reform that has characterized his leadership since his days as Solo’s mayor. With that as a starting point, prospects for greater legal certainty can only go up.