Ten Years After the Crisis: Indonesian Attitudes towards Business, Politics and Society

“In July 1997 the Thai bhat collapsed and the consensus was that Indonesia might catch a cold but instead it suffered a major heart attack. During most of the next ten years the country went off the radar screen of many international companies.” Wayne Forrest, President, American Indonesian Chamber of Commerce 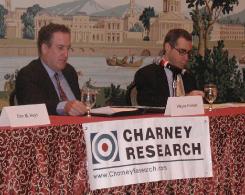 2007 was the 10th anniversary of the Asian Financial Crisis, a watershed event that continues to effect politics and economics in Indonesia. The country has made great strides to reform its politic 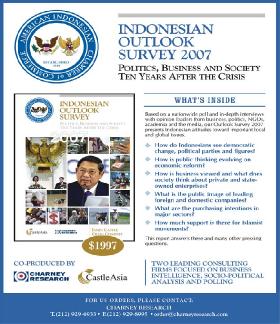 al and economic systems in those 10 years, especially since 2004. However, attention in the US has generally been on disasters, terrorism, and instability rather than change. AICC organized events in NY, Washington, Atlanta, and Houston during 2007 where the results of a major survey by Charney Research and CastleAsia of Indonesian attitudes were presented. The discussions highlighted the dramatic changes in Indonesia in the 10 years since the Asian Financial Crisis of 1997-98 and the resignation of President Suharto. Rather than a preoccupation with whether or not their nation would hold together, Indonesians major concerns were with governance and the economy, the normal issues of a democracy.